Why We Surveyed 30,000+ Women During the Pandemic

Homepage News Opinion Why We Surveyed 30,000+ Women During the Pandemic
Opinion

Why We Surveyed 30,000+ Women During the Pandemic

To truly reset and rebuild, we first need to listen.

From the intensified burden of unpaid domestic and care work to pay cuts, unemployment, and the sinister surge in domestic violence, women have borne the brunt of the COVID crisis. As we observe this year’s Human Rights Day and the subsequent end of the 16 Days of Activism against Gender-Based Violence, how will we achieve the deep-rooted, lasting change that we need?

The increasing polarisation of our societies has resulted in a constant unease that makes the promise of a post-pandemic rebuild seem far-fetched. For many who have spent decades advocating around the inequities in our social structures, the collapse of our systems in the wake of a crisis is unsurprising, considering they were built to serve only half the population.

To truly push the “reset” button we need information on what needs to be done to make changes that will benefit everyone. And yet, the lack of data on women – especially those from minority groups or from developing countries – means that time and time again, decisions affecting the whole of society are based on the experiences and opinions of a select few.

There are countless norms that it took this global standstill for us to really question – from our household roles and workplace cultures, to our carbon footprint and health systems. We have to reevaluate how we function at both the global and local level, and push for a “new normal” that we actually want – and that serves all people equally. A reality even better than the baseline we had pre-pandemic; crafted and chosen by people from all countries, cultures, contexts, and walks of life – representing all genders, sexual orientations, racial and ethnic identities, and economic backgrounds – to define the issues affecting their lives and inform how we rebuild our systems and societies in an equitable, inclusive way.

Global Office Consulting does a lot of work with organisations and movements that are trying to change the status quo. These clients have ideas and innovations that could fundamentally change the way our systems function – but are held back by a lack of funding and institutional failures to listen and trust both individual women and women-led organisations and movements by association.

As of January 2021, we have been working on a campaign with Women’s March Global and 50 + partners around the world to centre the voices of women and gender-diverse people on the issues affecting them. The current reality is that the overwhelming majority of people who hold power globally – from policymaking to funding programmes, to business – are still men. Through an online poll called the Global Count we wanted to ensure, that against the backdrop of this ‘global reset’ narrative, the voices of women and gender-diverse people were heard and included in the funding and policy decisions that impact them.

Not only is it morally wrong for whole societies to be designed and dictated by a select few – but also illogical and counterproductive. Why base decisions that affect everyone on the limited ideas and experiences of a limited bubble? Especially when we now have the technology to include the perspectives and opinions of a much wider and diverse sample, stretching locations, socioeconomic backgrounds, cultures, and identities?

Over half of the 31,600 women from 173 countries who have responded to Global Count so far selected “ending violence, harassment, and abuse” as one of the top issues impacting either their own life or local community. In fact, this was the top issue in every single country globally. This speaks volumes in that wherever women live, whatever our age, ethnicity, and whatever other demographic intricacies separate us, gender-based violence is happening. The recent International Day for the Elimination of Violence against Women and these past 16 Days of Activism act as yet another timely reminder that gender-based violence should be a top priority for NGOs, governments, and international institutions worldwide.

Overall, we need data on what needs to change so that we can make informed, collective decisions. But once the results are in, accountability is where power lies. It’s all well and good to state intentions and make commitments – but how can we ensure that these promises become actions that translate into positive changes for individual people?

The current lack of data on women and gender-diverse people results in inaccurate funding and policy initiatives. A 2017 report found data is either completely missing or irregular when it comes to tracking the Sustainable Development Goals (SDGs). On top of that, the connection between a lack of data on women and unreliability of funding and policy initiatives to progress gender equality is evident: only 1% of gender-focused aid went to women-led organisations from 2016-2017.

That meagre 1% is made even less effective by the fact that the bulk of it remained in “donor countries” and did not reach those carrying out the work at a local level. This trend has unfortunately continued as recently as this year’s Generation Equality Forum in July and the ongoing struggle for accountability, as many women-led grassroots movements wait to see the fruits of the impressive-sounding commitments pledged (totalling $40 billion) while the cameras were rolling.

Global Count respondents – representing all ages, sexual orientations, ethnic, racial, and socioeconomic groups – are revealing what they view as the most critical barriers to equality in their location – whether it’s financial empowerment, migrant rights, or racial justice among others – are primarily political, economic, or sociocultural issues. The results have been insightful, not only in terms of what the problems are, but who is most likely to face them – and perhaps most critically of all, where they stem from.

As such, we should take advantage of this much-needed data to direct resources, funding, and policies to claim this “reset” as something not only accommodating to, but led by women and gender-diverse people.

Rachel Firth is the Managing Director of Global Office Consulting and founder of Women in Dev, with over 15 years of experience working on national and international projects in the Gender and Global Health space. She has been involved in policy formation for global health initiatives in accordance with the Sustainable Development Goals, supported in the development of national strategies for Maternal and Child Health in Africa, and delivered global campaigns and advocacy initiatives in the gender and global health space.

Rachel set up GOC as a mission-led agency in response to the gap between the complex needs and small budgets of organisations doing extraordinary work, and the costs of communication agencies operating in the sector. Rachel also founded Women in Dev to build a community of women working in the social justice sector to work collaboratively to change the way the sector operates both for the people working within it, and the people it seeks to serve. She is an ongoing advocate for flexible working and gender equity in the workplace and operates a non-hierarchal, feminist leadership model within her organisation. 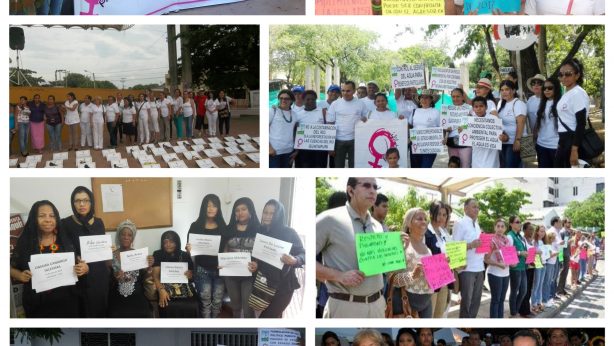 ¡Párala Ya! - How Community Leadership is Combatting “Machismo” in Colombia

This is an ongoing success story, demonstrating the power of...

This website uses cookies to improve your experience while you navigate through the website. Out of these cookies, the cookies that are categorized as necessary are stored on your browser as they are essential for the working of basic functionalities of the website. We also use third-party cookies that help us analyze and understand how you use this website. These cookies will be stored in your browser only with your consent. You also have the option to opt-out of these cookies. But opting out of some of these cookies may have an effect on your browsing experience.
Necessary Always Enabled
Necessary cookies are absolutely essential for the website to function properly. This category only includes cookies that ensures basic functionalities and security features of the website. These cookies do not store any personal information.
Non-necessary
Any cookies that may not be particularly necessary for the website to function and is used specifically to collect user personal data via analytics, ads, other embedded contents are termed as non-necessary cookies. It is mandatory to procure user consent prior to running these cookies on your website.
SAVE & ACCEPT
SearchPostsLogin
From Afghanistan to Bulgaria: Finding Purpose in Displacement
Six things to know about GEF
Women in Dev Steering Committee Spotlight – Natalia-Nana Lesterbush
Zan. Zendegi. Azadi: Woman. Life. Freedom.
What Africa Can Learn From Kenya’s Online Harassment of Female Politicians
Women in Dev Steering Committee Spotlight – Uma Mishra-Newbery
Gender, Victimhood, And Violence: Depp-Heard Trial Reflections
A patchwork of access: abortion across borders